The nuchal translucency (NT) scan, or “12-week scan,” is an ultrasound performed in the first trimester between 11.5 weeks and 13 weeks, six days. This scan is combined with a blood test that looks at two specific hormones of pregnancy: the free-Beta hCG and PAPP-A (pregnancy associated plasma protein A). This combined test is an extremely accurate non-invasive screening test available to help identify a fetus at risk for Down syndrome as well as other chromosomal abnormalities and some major structural abnormalities. The sensitivity of this only recently eclipsed by NIPT.  An ultrasound screening test is non-invasive and does not have any side effects or complications.

However, it will not give a yes/no answer to whether a problem such as Down syndrome is present. The only way to diagnose Down syndrome or other chromosomal abnormalities is by having a diagnostic test — either a CVS or an amniocentesis — and testing the fetal cells. These tests are invasive and require a needle to be passed into the maternal abdomen and uterus and therefore carry a small risk of miscarriage.

Many patients do not wish to have the diagnostic test because of the small risk of miscarriage and prefer to have the ultrasound screening test, the NT scan, to help them decide if they wish to proceed to testing the fetus. Unfortunately, while NT combined with the first trimester biochemical blood test is a very accurate screening test available for chromosomal abnormalities, it will not detect all fetuses affected with Down syndrome or other chromosomal abnormalities.

Chromosomal abnormalities occur when there is a change in the number or structure of the chromosomes. Normally we have 46 chromosomes, 23 pairs numbered 1-22 and a pair of sex chromosomes.

Boys have XY and girls have XX. The most common chromosomal abnormality seen at birth is Down syndrome. In Down syndrome, an extra copy of chromosome 21 is present, giving a total of 47 chromosomes.

To be certain your NT scan is performed correctly, it is important that you have your scan performed at an accredited practice. A NT computer package was developed by the London Fetal Medicine Foundation in the 1990s and was based on more than 100.000 pregnancies.

Strict auditing of the NT ultrasound work performed by every accredited practice in the world is undertaken several times a year. This ensures that the NT scan test is being performed correctly. Recently, the Royal Australian College of Obstetricians and Gynaecologists has taken over regular auditing of Australian practices.

Advantages of the 12 week NT scan

There are several advantages to undergoing a 12-week NT scan, including:

NT and Down Syndrome

At the end of the first trimester, there is usually a small amount of fluid beneath the skin of the fetus at the back of the head and neck. This fluid is called the nuchal translucency (NT), and can be easily and accurately measured to within a tenth of a millimetre. 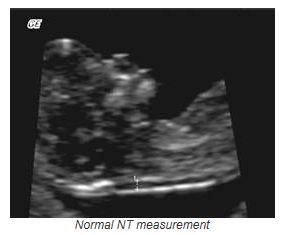 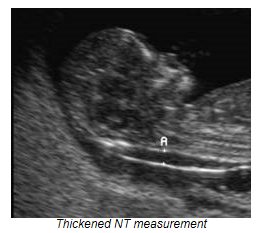 The extra fluid at the back of the head and neck usually disappears by 18 weeks. The fluid in itself is not an abnormality and does not harm the baby but may simply be the sign of a potential problem. The baby is measured from head to bottom to determine the crown-rump length and the nuchal translucency is measured. These measurements are entered into the computer program with the patient’s date of birth and the first trimester biochemistry blood test. The computer then calculates the patient’s age-related risk for Down syndrome and the new individual risk for this pregnancy. The findings are then discussed with the patient. The combined NT result will provide the patient with a risk assessment. This will either be a high risk (risk is greater than 1 in 300) or a low risk (risk less than 1 in 300). As this is a screening test and not a diagnostic test, even with a low calculated risk, Down syndrome is not completely excluded and can still occur occasionally.

Free-BhCG and PAPPA and Down Syndrome

Free- BhCG (Beta human chorionic gonadotrophin) and PAPP-A (Pregnancy associated plasma protein-A) levels can be assessed from a blood test. This is best done at 10 weeks, some two weeks prior to the NT scan but it can also be done just before or on the same day as the NT scan. The PAPP-A level tends to be lower and the BhCG level tends to be higher in pregnancies affected by Down syndrome.

When the ultrasound is combined with the first trimester blood test (BhCG and PAPPA) and nasal bone, the detection rate increases to 95%. None of these screening tests can give 100% detection. If a pregnant woman wants to completely exclude a chromosome abnormality, then she should consider having prenatal testing with either a CVS or an amniocentesis. Genetic counselling is also recommended. The results of the examination will be available to you shortly after the examination. One of our genetic counsellors or doctors will be available to discuss the result and the options for further testing.