Infertility is defined as the inability for a couple to conceive after at least 12 months of trying. About 10% of couples have difficulty falling pregnant and are diagnosed as infertile.

Part of the investigative work-up involves a pelvic ultrasound.

Women have two ovaries and these are located in the pelvis lying adjacent to the uterus(womb). Their main function is to release eggs and produce hormones. At birth, there are thousands of eggs in each ovary. As the woman matures and has menstrual periods, an egg will develop into a follicle measuring up to 20mm.The development of the follicles in the ovary can be seen on ultrasound and give information about egg production. The endometrium or lining of the uterus is a good reflector of ovarian function and will respond to the hormones and will have a specific appearance at different stages of the menstrual cycle. Normally during menstruation, the endometrium is typically thin.  As the cycle progresses, the endometrium gets thicker and oedematous and is called the proliferative phase endometrium. In the later part of the cycle, the endometrium becomes its thickest during the secretory phase. 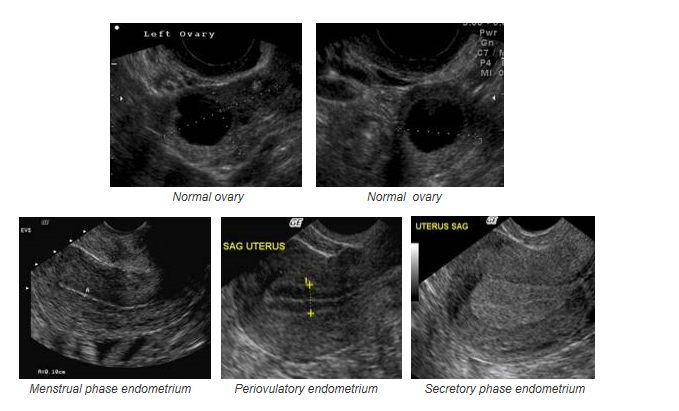 Sometimes problems that can affect fertility are found and can be treated.  Some examples of causes of infertility include:

Polycystic ovaries contain many small cysts, usually more than 10. Typically these cysts are small, measuring ~8mm, which are clearly visible on transvaginal ultrasound.  Your doctor will usually also arrange some blood tests to determine changes in hormone levels that are characteristic of PCOS. However, these levels vary considerably from one woman to another.

The cause of PCOS is related to the inability of the ovaries to produce hormones in appropriate proportions. Within the brain, the pituitary gland senses that the ovary is not functioning properly and releases abnormal amounts of LH (luteinising hormone) and FSH (follicle stimulating hormone). There are unusually high levels of LH and FSH that can be detected on blood tests.

The symptoms of PCOS include

The American Society for Reproductive Medicine agreed to strict diagnostic guidelines at the 2003 Rotterdam concensus workshop.

Congenital uterine anomalies have been estimated to occur in up to 5% of all women. They are a result of an abnormal development of the pelvic organs and may be associated with renal anomalies such as a single kidney or a variety of normal anatomic variations of the renal system. Congenital uterine anomalies can be seen with 2D and 3D gynaecological ultrasound. There may be a spectrum of changes, ranging from double uterine cavity, cervix and vagina to a single-sided uterine cavity to a rare situation where there may be absence of the pelvic organs. 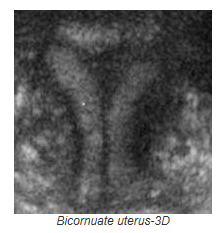 There may be an overgrowth of tissue in the endometrial lining giving rise to an endometrial polyp, or in the muscle of the uterus, giving rise to uterine fibroid (leiomyoma). These lesions can sometimes affect implantation of a fertilized egg and prevent pregnancy. These may be diagnosed with pelvic ultrasound usually requiring a vaginal scan. Sometimes the lesions can be so subtle that they are not readily visible on vaginal ultrasound. Your doctor may request further investigation of the internal structure of the uterus (endometrial cavity) by sonohysterography. 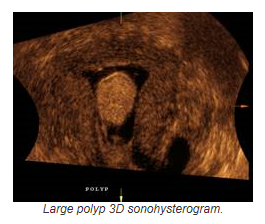 The fallopian tubes serve as the site of fertilization and passage of the embryo into the uterine cavity. Structural abnormalities in the tube that cause obstruction or interfere with the transport of the embryo along the tube accounts for 25-40% of infertility in women. A normal pelvic ultrasound does not exclude the possibility of tubal problems and the fallopian tubes are best assessed by Hysterosalpingo-contrast-sonography (HyCoSy).

Some treatments of infertility include ovarian stimulation and induction of ovulation by fertility drugs. Vaginal ultrasound is necessary to monitor growth of the ovarian follicles, to assist with the infertility management.

Ovarian hyperstimulated ovarian syndrome (OHSS) is a rare complication of ovulation induction. The ovaries are enlarged with multiple enlarged cysts. 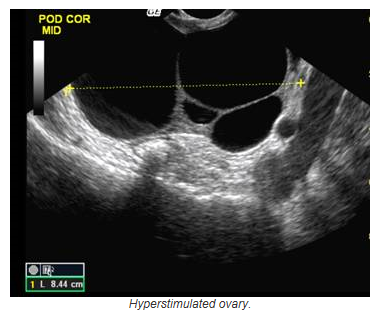 Hysterosalpingo-contrast-sonography (HyCoSy)is a transvaginal ultrasound technique used in the investigation of infertility. Its primary aim is to establish whether or not the woman’s fallopian tubes are patent or whether one or both is blocked.

The technique involves introducing an ultrasound contrast agent (Ex Em Foam) injected into the uterine cavity, which is then observed as it flows through the fallopian tubes to assess tubal patency. The contrast generates bright echoes that make visualisation of the tubes easier. The examination is optimised by the use of colour Doppler imaging. HyCoSy has increasingly been used as a first line investigation for infertility because it is convenient and safe. The procedure is a dynamic study that gives valuable information about tubal function and also allows examination of other pelvic organs.

There can be some mild discomfort associated with this procedure, particularly if the tubes are blocked. A simple analgesic such as Nurofen (2 tablets) taken half an hour before the procedure is recommended.

The procedure should not be performed during pregnancy, and is ideally performed at the completion of a period, on approximately day 10 of the menstrual cycle. This ensures that the procedure does not interfere with implantation of an embryo.