Acute pelvic pain is a common problem with multiple possible causes. Because ultrasound can distinguish between many of the diagnostic possibilities non-invasively, it is the preferred initial imaging technique performed to evaluate this condition.

This is the most common cause of acute pelvic pain. Ovarian cysts are fluid-filled sacs that form on the ovaries when the follicles (sacs) on the ovary that contain the egg mature, but do not release the egg for potential fertilisation. A woman can develop one cyst or many cysts and ovarian cysts can vary in size.

Functional cysts are the most common form of ovarian cyst, are completely normal and form during ovulation. The follicles (sacs) on the ovary that contain the egg often do not mature, and become cysts. These cysts usually disappear during menstruation, before another menstrual cycle begins. If not, they will shrink in about one to three months. Only women who are ovulating (premenopausal) form functional cysts.

Many women may have functional cysts or benign cystic tumours without having any symptoms. However, sometimes a cyst will swell large enough to cause pressure or pain in the abdomen. The cysts also may put pressure on the urinary tract and cause problems with urine flow. Some women may have pain during sexual intercourse. Although it is rare, it is possible for a very large cyst to become twisted, stopping its own supply of blood. This can cause nausea, fever, and severe abdominal pain.

Most cysts are benign (not cancerous). Rarely a cyst may turn out to be malignant (cancerous). For this reason, your doctor should check all cysts. If ovarian cysts are found early, many of the problems they cause can be treated. 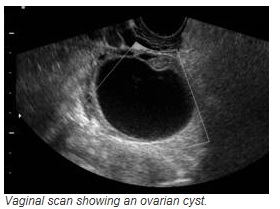 Endometriosis is a condition where endometrial tissue grows outside of the uterus, mainly within the pelvis, such as in the ovaries, tissues (ligaments) supporting the uterus but also less commonly the appendix, bowel, or bladder. Endometriosis affects up to 1 in 4 women of reproductive age.

Like the endometrium inside the uterus, the endometriotic implants swell and bleed in response to the monthly hormonal cycle. The body responds by surrounding the affected area with scar tissue. The formation of scar tissue (adhesions) can result in damage to pelvic structures and may cause these to stick together, making them unable to move freely. Over time, the endometrial tissue may also enlarge and form cysts, particularly in the ovaries.

The symptoms of endometriosis are variable and do not always correspond to the severity of disease.

1. Pain: with periods, ovulation, intercourse, when passing urine or opening bowels and chronic pelvic or lower back pain

Currently, there is no simple screening test (such as a blood test) for endometriosis and the only definitive diagnosis is by laparoscopy (a telescope is passed through a small incision at the umbilicus to visualise the internal organs) and obtaining a tissue sample (biopsy). If the endometriosis implants bleed, they may form cystic masses, which are detectable on transvaginal ultrasound examination. 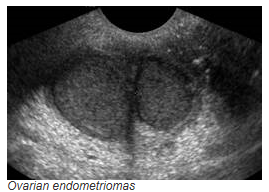 Most cases of pelvic inflammatory disease (PID) are due to infection that migrates upward from the urethra and cervix to the endometrium, and then spreads to the fallopian tubes with reflux of menstrual blood. The infection may eventually spill from the tubes into the pelvic cavity.

Untreated, PID causes scarring and can lead to infertility, tubal pregnancy, chronic pelvic pain, and other serious consequences.  Many different organisms can cause PID, but most cases are associated with gonorrhoea and genital chlamydial infections.

The major symptoms of PID are lower abdominal pain and abnormal vaginal discharge. Other symptoms such as fever, pain in the right upper abdomen, painful intercourse, and irregular menstrual bleeding can occur as well. PID, particularly when caused by chlamydial infection, may produce only minor symptoms or no symptoms at all.

Women with recurrent episodes of PID are more likely than women with a single episode to suffer scarring of the tubes that leads to infertility, ectopic pregnancy, or chronic pelvic pain. Infertility occurs in approximately 20% of women who have had PID.

Most women with tubal infertility, however, never have had symptoms of PID. Organisms such as C. trachomatis can silently invade the fallopian tubes and cause scarring, which blocks the normal passage of eggs into the uterus.

Transvaginal ultrasound is often able to identify signs of inflammation in the pelvis, such as tubal and ovarian abscesses and infected free fluid. Treatment for PID requires antibiotic therapy. Severe cases will require hospitalisation for intravenous antibiotics and occasionally laparoscopic surgery.

Ovarian torsion is a condition in which an ovary twists or turns on its supporting ligament, cutting off its blood supply. Women with this condition have pain that begins suddenly and steadily gets worse. The right ovary is affected more often than the left. Ovarian torsion usually arises in only one ovary at a time. They can occur in both normal or enlarged ovaries and fallopian tubes.

There are a variety of conditions that can cause torsion of the ovary, ranging from changes in normal ovaries to congenital and developmental abnormalities, or a disease that affects the tube or ovary such as ovarian cysts or fibromas, or a tumour of the ovary or tubes. Trauma to either the ovaries or the tubes can occasionally cause ovarian torsion.

The characteristic symptom of ovarian torsion is the sudden onset of extreme lower abdominal pain that radiates to the back, side and thigh. Fever, nausea, vomiting, diarrhoea, and constipation can accompany the pain.

Transvaginal ultrasound is best method for detection of ovarian torsion, by identifying an enlarged, swollen tender ovary with absent or reduced blood flow in the ovarian blood vessels.

This term refers to a pregnancy that is growing outside the uterine cavity in an abnormal location. Ectopic pregnancy is one of the most common indications for pelvic ultrasound in patients with pelvic pain.